Believe it or not, this is a travel story. It starts with some friends of my parents, who were in the air force. (Technically, my dad was in the air force, but in actuality, we all were.) That story—of my parents and their friends—is connected to a coin, among a lot of coins given to me by those people. It ends up with a piece of jewelry I wore when I got married … because I wanted something sentimental. Let me tell you about it.

My parents always made a lot of friends wherever they went, and early in Daddy’s air force career they became friends with a couple who were probably ten or fifteen years older than they were. I can’t remember their names, so I’ll call them Hank and Shirley.

Hank was also in the air force, but his career path separated from my dad’s. I suspect he was in military intelligence, because they were stationed all over the world. They had no children. 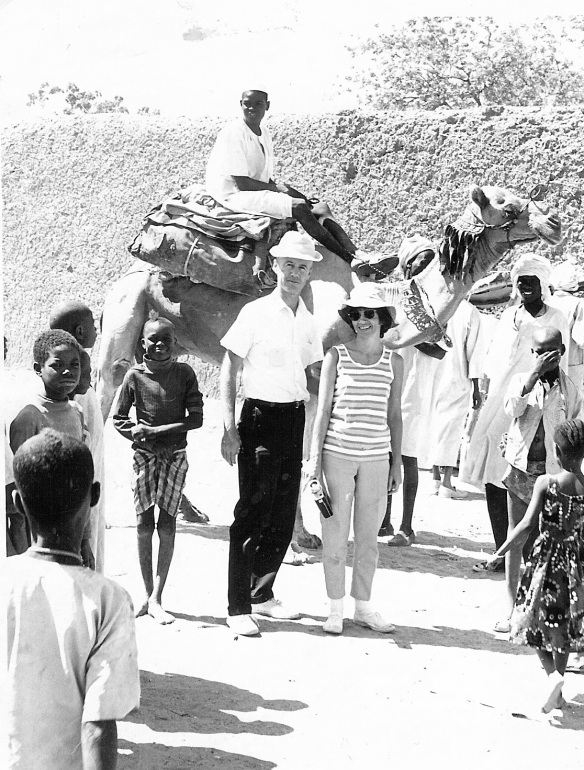 Hank & Shirley. I have no idea where this was taken. Someplace where they have camels. 🙂 My guess is late ’60s, early ’70s.

Eventually he finished his career in Washington DC. (Military intelligence and the diplomatic corps are a natural fit.) They lived in Arlington, Virginia, which is right across the Potomac from DC and, more significantly, the location of the Pentagon.

When I was a freshman in high school, my parents drove me to San Francisco and put me on an airplane (possibly my first commercial flight, though I’d flown in small aircraft all my life) all by myself, and I flew to Washington (Dulles National Airport) for my spring break week. April 1969.

I was there to see my country’s monuments. And Hank and Shirley took me everywhere!

This is a view of the Washington Monument taken from across the Tidal Basin; we’re standing at the base of the Jefferson Memorial. I felt very smart in that suit, which I’d made myself in a home ec class.

We parked ’round back at the Capitol Building. I imagine Hank had a special parking situation.

And I do mean everywhere. The Lincoln Memorial, the Jefferson Memorial, the Bureau of Engraving and Printing and the Mint, the Smithsonian Institution,* the White House, the Washington Monument, the National Mall, the Pentagon, Ford’s Theatre, the home in Georgetown where the Kennedys lived when he was a senator, Arlington National Cemetery, Mount Vernon, the US Naval Academy at Annapolis (Maryland), and many other places I can no longer remember. (I wish I’d journaled my trip then, as I do my trips now.)

In 1868 the figurehead from the USS Delaware (1817–1861) was installed at the Naval Academy; in 1930 a bronze replica replaced the deteriorating wooden bust. I was told they called it Tecumseh, though I’ve since learned that it is really Tamanend, the Delaware chief who welcomed William Penn to his land on 2 October 1682. As you can see, it’s huge.

I was even allowed to flirt with some naval cadets, which is why I’m laughing in the photo above. 🙂

Former president Dwight Eisenhower had just died right before I got there, so all of my photos show flags flown at half-staff. 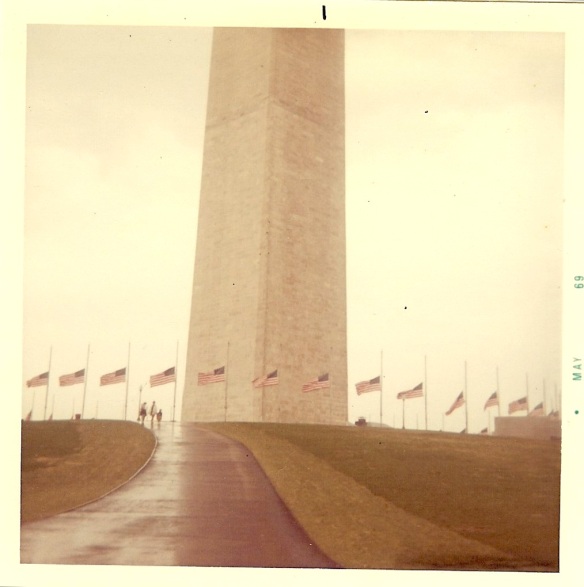 Washington Monument on a rainy day in April 1969.

This is the Marine Corps War Memorial, which stands outside Arlington National Cemetery.

I remember all the tourism. I don’t remember anything, really, of my evenings with Hank and Shirley. We must’ve talked a lot about history and their travels, though, because a few years later they visited my parents and brought me a box full of foreign coins. Mostly from Europe.

A Coin From Ireland

Among those coins were several from Ireland, a place that had always held a fascination for me. There’s a silver coin with a salmon on it, but it’s very worn. There are three copper one-penny coins (1942, 1942, and 1949) with a chubby hen drooping her wings and holding her tail high—really delightful artwork. On the reverse, of course, the harp, which is the national symbol of Ireland.

My favorite, though, was a newer coin, a copper two pence coin issued in 1971, the first year of minting for this design. It’s called “ornamental bird” and is a Celtic design. It’s beautiful. And since 1971 is the year I graduated from high school, it’s a meaningful date for me personally.

Fast-forward a few decades, and I meet the Irishman. Fast-forward a few more years, and I’m planning to marry him, so I think I’d like to wear that coin on a necklace. For that you need a coin bezel, and if you want something nice you probably need to involve a jeweler. I started looking for such a bezel on a trip to Ireland, because I figured even though they use euro-coinage now, local jewelers might have stock bezels for historic coins.

Well, no. And jewelers in the United States were going to have to custom-make something. I set the idea aside for awhile.

Then I remembered I have a friend who makes jewelry. (Her name is Rebecca Cole, and you should have a look at her website. She does beautiful work.) I wrote her a note and told her a shorter version of this story. I told her I’d like a gold bezel, because I mostly wear gold jewelry. I left out the part about the marriage, mostly because we were keeping this information on the down-low.

As you undoubtedly know. 🙂

She said, “I only work in silver. But I think I have an idea.” We discussed price—“If you like it”—it was reasonable, and I sent her the coin right away. I figured I’d hang the coin from my bouquet and wear it later at my reception in Ireland.

In the meantime, I bought a dress. I spent more on it than I’ve ever spent on a dress, ever. From Nordstrum’s. Online. It was perfect in every way, but when it arrived, I noticed the beadwork along that princess neckline had some silver in it. The jewelry I’d planned to wear—gold—wasn’t going to work. Hmpf.

A few weeks went by, and Rebecca emailed. “I haven’t forgotten,” she said. “I had to order something for the project and when it came it was the wrong thing, so I had to order the right thing.”

I wasn’t worried, but more days went by, and now it was getting close. So I broke down and told her why in an email. She answered that she was about to send it off—and that she wasn’t going to send me a photo. It would be a surprise. Watch the mail, she said.

A couple days later, a small box arrived. Three little bags, two business cards, a necklace, and a note.This is what it looked like when I opened it.

It’s a wedding gift. A beautiful, one-of-a-kind gift. I cried.

The “part” Rebecca had to buy was another, identical coin, so she could clean it and make molds from it. Because if you clean an antique coin, you destroy its value (who knew?) and she didn’t want to clean the coin I’d sent her. From these molds, she made two pendants. Then she returned the coins and the molds to me, which means what I have is one-of-a-kind.

One pendant reads May the road rise up; the other, May the sun shine. You know these lines from what is often called an anonymous Irish blessing:

May the road rise up to meet you.
May the wind always be at your back.
May the sun shine warm upon your face,
the rains fall soft upon your fields, and,
until we meet again,
may God hold you in the palm of His hand.

So through what feels like a little miracle, I ended up with a gorgeous silver necklace that was perfect with my wedding dress (I layered it with my pearl necklace and wore my pearl earrings) and was personal and meaningful for both of us. What a beautiful gift! (’Becca, I can’t express how much this meant to me. Love you, sister-friend.)

* The Spirit of St. Louis—the airplane flown from New York to Paris by Charles Lindbergh in 1927—was a highlight. Lindbergh was a hero in our house. And Daddy, a pilot himself, was born and raised in St. Louis.