Ah, it’s January, and we’re thinking about traveling. Aren’t you? We had dinner last week with a friend who is planning a trip to Ireland and wanted to run some things past the Irishman—and we had a bang-up time eating, drinking, and discussing where to look for great Irish experiences, including some “skip this, do that instead” recommendations.* Our friend has a limited amount of time—ten days from start to finish—and has to make it count.

This is always a concern, of course. Which is why I love the “36 Hours in …” series from the New York Times, a carefully-planned three-day weekend in a variety of interesting spots. They’ve been running this feature for years, and I find it perfect for travel daydreams.

For example, we’d like a little getaway later this year. Not too far, somewhere we can drive. Here’s what pops up in driving range in the archives for the last couple years:

We’ve got some other plans, too, but it’s too soon to talk about them. In the meantime, enjoy your travel daydreams!

* Skip the Cliffs of Moher, try Slieve League instead. That’s one.

10 October 2015, Saturday
Today we got up, had a wonderful breakfast—including a delightful chat with the gentleman who makes the omelets—and then got on the N56 and headed west. We junctioned with the R263 and drove along the Atlantic coast in sight of the sea.

Twelve years ago we stopped at this very lay-by on the R263 just on the other side of Killybegs in midafternoon on a Saturday.

On the R263 about a mile outside Killybegs, at a curve in the road, this little lay-by.

That day it was a little sunnier (you can see it if you scroll down in this post) but a lot windier. I called my son in Cookeville, Tennessee, and woke him up; he was a senior in college and had just taken the test to CLEP out of biology, which would enable him to graduate the next spring—in four years. He’d passed. We had a moment on the phone. 🙂

The view here is magnificent.

Fintra Bay, on the coast of County Donegal. 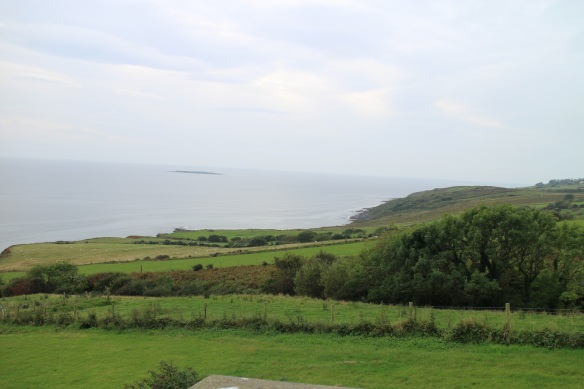 Looking out to sea from the little parking/picnic area.

That particular day we were on our way to see Slieve League—some of the highest sea cliffs in Europe—but missed the turn-off. Now, of course, we have the Wild Atlantic Way marketing campaign, and the route is a little better signposted. 🙂 We were determined to get there. Slieve League was calling us.

I’d done a lot of research. I’d printed off maps. I knew we had to go to Teelin. And so we did. Here’s a map:

Again, Google Maps is failing me. This is a screen grab. You can see an interactive map here.

It was definitely worth the journey—but the drive was a little harrowing. We stopped a few times to catch our breath.

Here we have passed Teelin and are still headed up. Can you see the rock wall on the far hill (right-hand side)? That wall runs along the road.

The road got narrower and narrower; there were curves and switchbacks. We kept climbing.

This car is pulled over (see the wide spot it’s on?), waiting for me to pass. Yep.

Then … it seemed like we were at the top. We got out. Took more photos.

Yes. Someone has walked/climbed out to that spot. We did not. Remember you can click any photo to zoom in.

But people kept driving by us (some people hiked by us), so we went on. You come to a car park and a gate; the road beyond the gate—which you have to open yourself, reading the warning sign as you do so—is little more than a track. I was already worn out and failed to take a photo.

We drove on. You do know when you’ve arrived. Because OMG.

You can’t drive any farther than this. But people do continue on foot—you can walk those peaks, and people were doing it on this day. It was chilly and windy, even where we were.

Yeah, that’s a little beach way down there. I’ve read that there are boat tours that take you up close, so you can look straight up. From here, we’re far enough away from the edge that it’s hard to get a sense of how high they are.

But what a view! 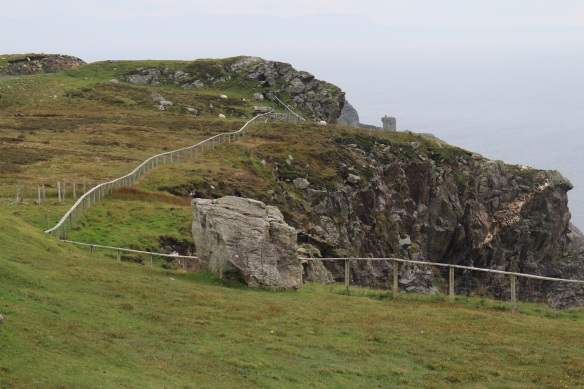 Yes, that’s another little Martello tower out there.

We lingered for a good while, taking pictures and just taking it in. There were sheep everywhere.

Some were close enough to touch. They’ve seen our kind before. 🙂

And then we made our way back down the mountain. Slowly and carefully.

Gerry had seen a sign for a sweater shop in Teelin. “Shall we have a look?” he asked when we got back to civilization (i.e., Teelin). When you look at it on the map—sixteen minutes by car, it says—it doesn’t look like such a big deal.

There seemed to be nothing out there.

There were signs, though. Every time we thought Have we gone too far? Did we miss a turn? there was another sign, leading us on. And then (truly, out in the middle of nowhere), there it was. The Glencolmcille Woollen Mill.

The Donegal region is well known for the wool products made here (from the local sheep, of course, which you see everywhere)—weaving and knitting. We’d already seen some beautiful handmade (not machine-woven!) fabric on Inishowen, and you can really see the difference. We wanted to see more.

So we drove and drove and found the place. Rossan Knitwear. Family business. This truly was the factory outlet, because once I saw the label, I recognized it. I’d seen these sweaters in other shops (and at slightly higher prices). We wandered around. It was the end of the season, so inventory wasn’t what it might have been, but after much consideration, we each picked out a sweater. It was a difficult choice because, oh! the colors.

They are beautiful, hand-loomed by the lady you see in the photo below. I asked to take her photo, and she removed her glasses. I was wearing a machine-knit (I’m pretty sure) sweater I bought in Killarney twelve years ago. Still, she remarked on it, and was impressed at its age and condition. (The red one. You know the one; I wear it all the time. I dress it up and dress it down. It goes everywhere.) So I guess the lesson here is a sweater bought in Ireland is a worthwhile investment.

She made my sweater!

We started making our way back.

On the little road leading back to the R263. Sheep! This one rounded the corner and ran up into the farmer’s yard.

When we got back to Carrick, there was a Saturday market in full swing, complete with livestock and crafts. It was hard not to stop, but we pushed on. We had treasures in our boot. 🙂 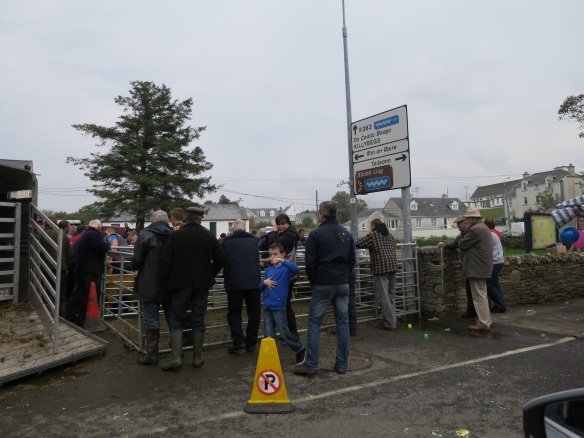 Back in Donegal Town, we stopped for an early supper of comfort food at the Blueberry Tea Room on Castle Street. It had been recommended to us by a shopkeeper the day before, and was also written up in the Wild Atlantic Way book we’d purchased back in Moville. The place was packed, and the ambience was fantastic.

When we returned to the hotel, we noticed there was a wedding reception just getting started. (First we noticed it in the parking lot. We had to drive out to the back nine, so to speak, to park.) There was a vintage Rolls Royce parked in front of the entrance, as if the wedding couple were the only people who might be using the door.

Interestingly, there had been a wedding reception here at the hotel Friday night, and we barely knew they were here, though we’d seen them and their guests coming in. But starting with the Rolls outside, this was a very upscale event. Or at least you would have thought that, based on the accoutrements. Yet by 3am—because, yes, we were still awake—they were behaving like what people in my neck of the woods would call trash, these fancy people, both men and women. One couple had an argument in the courtyard right outside our bedroom window, using their outside voices. Groups of people shouting (shouting!) and carrying on in the halls as if they were the only people staying in the hotel. It was shameful. Money doesn’t buy class, obviously.