Today my sis, Jill, and her daughter, Alli, were arriving—Jill from the family home in California and Alli from London. I’m so proud of my sweet niece: she’d just spent the last six weeks traveling in England, Scotland, and Wales … all by herself (mostly). With a tiny little suitcase. (Those of you who know what a clotheshound she is might be surprised. I’m just impressed.)

Alli’s an experienced singer/songwriter and also is a member of her community choir (Monterey Peninsula Choral Society). MPCS was one of just six choirs in the world invited to perform at the 2012 Olympics in London; they pieced together a little tour that included three dates in Paris (here’s a video of one song; Alli’s the female soloist in the foreground just right of center) and a few more in London, including one at the Olympic Park. After that, the choir went home—and Alli stayed, knowing she’d be coming to Ireland for a wedding soon.

Yes, Gerry has been a part of my family for a long time, too, and his nieces stayed with my California family a few years ago; later that year Alli flew to Dublin, where she became close with Eoin and Tracy, the couple whose marriage we’re all here to celebrate.

Margaret, Gerry, and I drove in from Laytown. Jill was already on the ground, and from her we learned Alli’d missed her early morning flight, so we had a forty-five minute wait. (The airport had several shops, so I bought postcards and stamps while we waited.) Although we’d thought we might go into Dublin, we were all still very, very tired, so we scrapped those plans. Gerry cabbed it home and we gals drove out to Portmarnock village, where the wedding reception would be held (at the Portmarnock Hotel and Golf Links). We’d all stay there Friday night; Jill and Alli were checking in today.

It’s a beautiful hotel. (Be sure to check that link. Wow.)

This is the lobby of the Portmarnock Hotel and Golf Links. Gorgeous day!

More of the hotel lobby.

Looking out those windows toward the back, with the sun streaming in. I really liked this room.

And it has a beautiful view. I’d seen Ireland’s Eye (a small island in the Irish sea, just north of Howth) from Howth (pronounce this with a long O, like hoe-th), but never from this angle.

Ireland’s Eye from the Portmarnock Hotel. 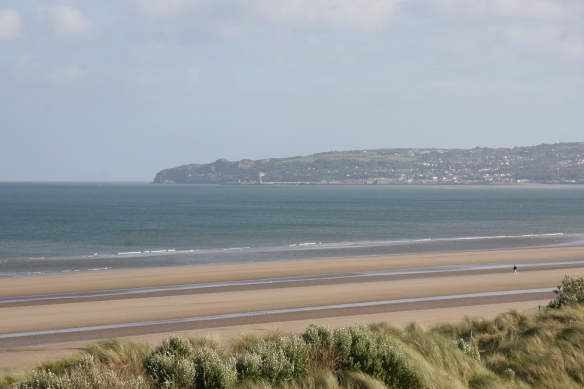 That’s Howth Head in the distance.

I would definitely stay there again.

It was quiet in the midafternoon. All the golfers were out on the links. So when we simultaneously realized we were hungry, we had the dining room almost to ourselves.

Alli and Jill in the dining room at the Portmarnock Hotel and Golf Links. So tired! So happy to be here!

Tea, please! And then: May we see a menu? I had the most wonderful vegetable soup I think I’ve ever had; it was pureed.

After lunch, Jill and Alli checked in to rest, and Margaret and I drove back to Laytown via the Coast Road, which took us through Malahide village. We stopped here, took some photos and bought some Kleenex, as Margaret had unfortunately come down with a ferocious cold. 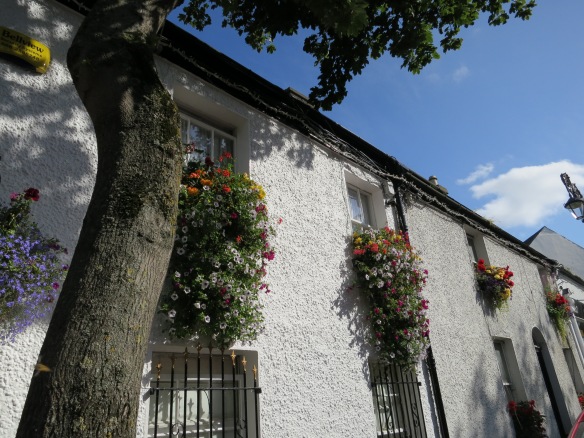 Margaret was charmed by the beautiful windowsill flower baskets in Malahide. She took this photo.

We were back in Laytown in time for the races. And Neil and Maureen’s subdivision is right across the R150 from the strand where the ponies run.

Walking up the street into Neil and Maureen’s subdivision.

The Laytown Races are unique in all of Europe: it’s the only horse racing event run on a beach under the Turf Club’s Rules of Racing, which it has been doing since 1868. It’s a huge event in tiny Laytown village, with as many as ten thousand people showing up to eat, drink, place bets, and watch magnificent Irish thoroughbreds run on the beach at low tide in the late afternoon.

Margaret was exhausted from travel and being sick, so I walked down to the races by myself. There are bleachers, but many people just stand along the edge of the beach to watch. This is where I found myself, since I didn’t really know where to go; I asked a gentleman standing near me, and he gave me the down-low.

Laytown Races 2012. The only sanctioned beach races in Europe (and possibly in the Northern Hemisphere).

Walking the horses down to the starting gate.

Turns out he’d come all the way from England for race day. We had a lovely chat. When he heard I was from Nashville (and this is my standard response when asked where I’m from; everybody has heard of Nashville) he waxed poetic about Duane Eddy (he’s a fan). Then he mentioned the flood we had in 2010, which surprised me, since it barely got any coverage in the national news.

I watched a few of the races (I didn’t buy a program, so I can’t tell you which horses I saw, really), and then I walked around a bit. There were all sorts of folks there, from the very well-heeled horse people—who were dressed up in suits and dresses and, yes, elaborate chapeaux—to folks like me in casual clothing. I bought an ice cream cone and ate it on my way back to the house.

A day at the races.

Margaret and I made simple sandwiches for dinner—to tired to go out—and I discovered Maureen’s stash of chocolate in the fridge. Dessert!

There was trouble with the wifi here—Neil had been bickering with his service provider for days prior to our arrival, but the fix never did come—so I caught up on my notes, did a little work on the manuscript I’d brought with me, and then we called it a night. Tomorrow (Friday) was the wedding, and it would be a long day.

No matter where you are in the world, an airport is a great place for people-watching. 🙂