As usual we all met in the dining room for breakfast. We were in the capable hands of Marie—Edel’s friend who also works for her—who treated us to homemade banana bread, in addition to all the regular breakfast goodies.

Edel and her daughter, Emerald, had left before any of us were up that morning, to go to the National Ploughing Championships in County Wexford. No, I’m serious. This falls into the Only-in-Ireland category, I think (although it’s really more like a festival). The Irish Times was predicting more than 180,000 in attendance over the three-day event.

Edel has an interesting story (don’t we all?). She’s a nurse, and spent some time employed at a hospital in Arkansas, where she met the man who would be Emerald’s father. He is of Vietnamese descent, and Emerald was born with dual citizenship (Irish, U.S.). Edel later returned home to Lahinch, bought the B&B, and continues to work as a nurse. Emerald’s dad has visited Ireland four times to see her; she is sixteen, a music student, and, apparently, a fan of the National Ploughing Championships.

Jill and Alli had volunteered to walk Draco, the house dog (named by Emerald!), so shortly after breakfast, off they went.

Off they go! See the town on the other side of the bay? Liscannor. They ended up walking halfway  there.

They did stop to wave. (Crazy situation with all the wires, no?)

Tide was on its way out, and the sun was trying to come out too. (Jill’s photo.)

I’m not sure where they were at this point, but this is a nice shot! (Jill’s photo.)

They stopped here, near the 12th and 13th holes of the Old Course at the Lahinch Golf Club. That’s the Inagh River, and the bridge supports the R478 (the route to the Cliffs of Moher). (Jill’s photo.)

In the meantime, I had declared this a day of rest. Frankly, I was exhausted, between doing the driving and just trying to keep up (I was still taking antibiotics for the pneumonia)—and I was desperate to finish the editorial notes that were due on 30 September. So while Jill and Alli went off for that long walk (several hours), Margaret and I went downtown. I settled in at Kenny’s Bar, where I’d have wi-fi, and Margaret shopped around a little. Later she checked in to Facebook while I wandered around and shopped a little.

One of my favorite places in Lahinch is the Celtic T-Shirt Shop. It’s classic, y’all: tiny and stuffed to the rafters with the most beautiful T-shirts (and tank tops and dresses too)—and one of the screen printers will probably be working as you’re shopping. Most importantly, the designs are unique and gorgeous and sold nowhere else. You can buy a T-shirt with Ireland printed on it anywhere, even in the States. These are the real deal. (I did some Christmas shopping.) 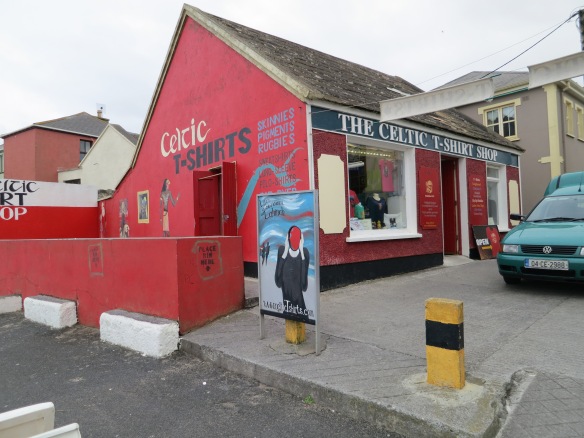 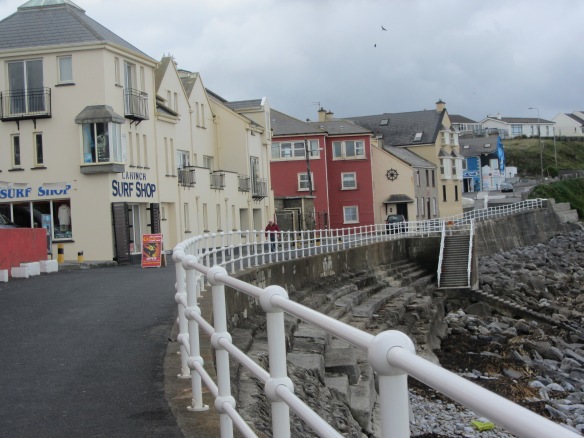 It’s not exactly a boardwalk any more, but there are several shops along the ocean in Lahinch. The Celtic T-Shirt Shop is just out of the shot on the left. (Jill’s photo.)

Lahinch is a popular surf spot. If you look closely you can see Jill and Alli near the top of the photo; they’re the ones with the dog.

I also stopped in at the studio of Phillip Morrison and had a lovely chat with him. Love his work! I know it’s not for everyone but I was quite taken with his cityscapes. One of these days, perhaps …

It was very cozy in the bar, sitting at the back near the stage so I could plug in. I went through a couple pots of tea. We had soup (mine was roasted carrot) and a shared garlic cheese pizza for lunch. And I got a lot done!

We were anticipating Eoin and Tracy for dinner. Yes, we hadn’t gotten to visit much—what with the wedding and all—so after they returned from their honeymoon, Eoin insisted on driving down from Dublin—about a three-hour drive. They arrived in Lahinch around 5:30.

It was Arthur’s Day, and we got a free pint each, which is always a plus. (Arthur’s Day was started by the Guinness Company in 2009 to celebrate 250 years of the company’s history. It is controversial in some circles—it’s a marketing ploy, after all—but I assure you, in a snug pub in the late afternoon, it’s all about the black stuff.) We ate dinner and drank and visited—and a good time was had by all!

No matter if the tide was low or high, up near the sea wall there was always an assortment of birds rooting furiously, quickly, in the piles of seaweed. No arguments among them, but every bird (of all sizes) intent upon his own little patch.

There’s a meal to be had here! 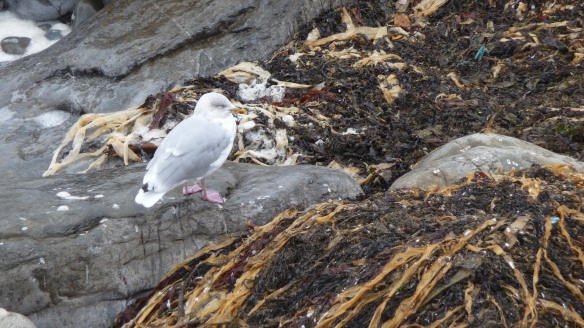 Herring gull: most common in Ireland.

One thing decided at the pub last night was that Jill and Alli would ride back to Dublin with Eoin and Tracy, so by ten o’clock, Margaret and I were packed and loaded and in the car headed back to Dublin with a few slices of Marie’s wonderful banana bread to sustain us. 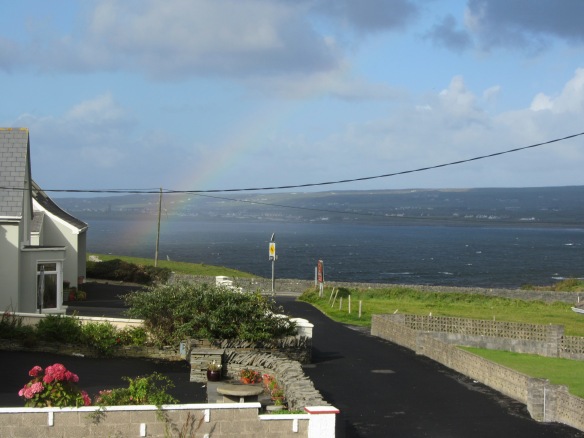 It was a gorgeous, rainbowed day! Jill and Alli had a slightly less electric cable–obstructed view from their room. (Jill’s photo.)

We thought we’d stop at Clonmacnoise on the way back, but when all was said and done, we missed a turnoff, and with the rain we thought we’d push on to Dublin and go to Glendalough later.

So we checked in at the Ferryview Guest House in Clontarf (pop. 31,063—but who’s counting? It’s Greater Dublin, for all intents and purposes), which is an upscale community right on the sea just north of Dublin Port. 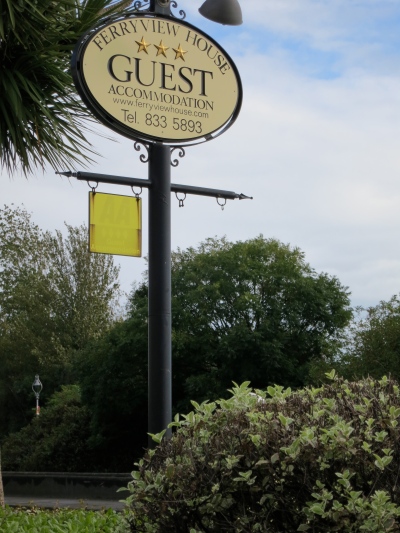 You can’t tell from this photo but the Ferryview sits right on the Clontarf Road and overlooks Dublin Port. (Margaret’s photo.)

We met Jill and Alli at Gerry’s, said our good-byes (they were flying out early the next morning) and then Gerry, Margaret, and I went out to dinner with Neil and Maureen. I think I am feeling better—although it will turn out that I still have no energy or stamina—and am looking forward to the next five days in Dublin.

We pulled up to the Ferryview after dark and met Dominic, the “night porter.” He had a very specific idea of where we would park (parking is always an issue in Ireland), and by the time I’d managed to get out of the car—which involved, no joke, my falling into a hedge—I was well and truly annoyed with Dominic. He had an unusual way of speaking; he seemed like he was not quite there … but he was. Didn’t miss a trick, in fact. On the other hand, he could be annoying; he circulated in the dining room at breakfast and chatted up everyone, even when they didn’t really feel like chatting or were put off by his strange manner. As the days wore on, however, I began to appreciate Dominic’s usefulness, and I was disappointed the day I learned he’d gone home for the season.