One of the enduring blessings of my life is I was born to a mother who played piano (very well) and a father who loved good music. Our house always had a record player (and then later, a “stereo”—yes, that’s what we called it in the dark ages) and lots and lots of records. I knew who Bach and Beethoven (and Monk and Sinatra) were from an early age. My parents bought a piano when I was seven, I started taking lessons, and I never looked back. From that point a lot of what I did centered around music (piano lessons, recitals, marching band, concert band, my drummer sweetheart, the one I married and much later had a marvelously musical son with …)

Now that I’m old I know quite a few musicians, many of them friends of Jesse’s.* I tell them all the same thing: When I die, I want you all to gather at the house and bring your instrument. (I think the rest will take care of itself.) No funeral required. Just a little live music. A concert.

That word concert is as familiar to me as the word book. I am at home in a concert hall. My parents took us kids to concerts when we were small, and I never stopped that habit. The point in all this is I went to a concert last night, and it involved a bit of a road trip, which is why you’re reading about it on my travel blog.

One of the marvelous musicians I know is Patti Rudisill—a talented young violinist who performs (among many other things—you can read more here) with the Huntsville Symphony Orchesta. I’d heard her say some great things about them—interesting programs, passionate conductor, and so on—so when she told me the HSO’s last show of this season would include Beethoven’s Ninth, well, I marked it on my calendar and that was that.

Beethoven’s Ninth! The Ode to Joy! How often do you get to see that piece performed live outside of New York or Chicago or San Francisco? I’ll tell you: not often. So I rustled up a friend to go with me and I hit the jackpot: Shelley has family and friends in Huntsville and is familiar with the town, which I am not (haven’t been there in about twelve years or so). Oh happy day!

Huntsville’s an interesting town. You know it because, you know, it’s where all the rocket scientists work, for real, at the Redstone Arsenal, the US Army post at which Wernher von Braun arrived in 1950 with his team of rocket specialists. (He was stationed with the army there for the next twenty years.) Not what you expect from a little town in north Alabama (now pop. 180K but still this odd mix of Old South and the Jetsons).

So I did a little forward planning. We were going to take the scenic route—and 231 is very scenic between here and Huntsville—and stop in a highly recommended restaurant in Fayetteville for dinner before continuing on to the concert. I’m so glad I called to see if we needed reservations, because it turns out the place was going to be closed for a private party. On Saturday night! (Well, what do you expect in a town of less than 7,000?)

We ended up at Viet Huong in Huntsville, out near the mall, and it was fantastic. We were there around 5:30 and the first thing we noticed was most of the patrons were Vietnamese. In an ethnic restaurant, this is always a good sign. Food was good—I had spring rolls and a bowl of bun—a deep bowl layered with crispy lettuce covered with bun (rice vermicelli), topped with bean sprouts, chicken, peanuts, and other vegetables.

By 6:30 we were on our way to the Von Braun Center for the concert. Shelley drove us right there. (Me, I’d’ve had to’ve gotten lost.) 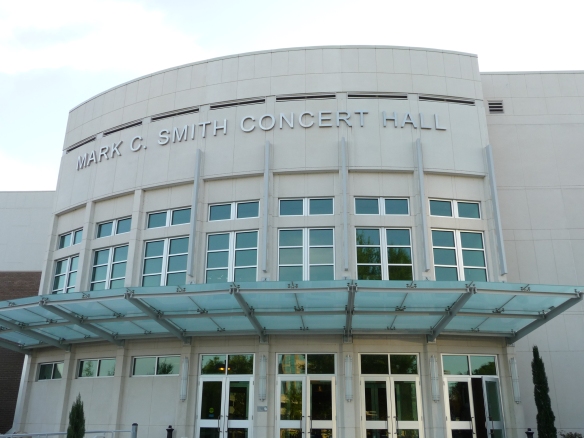 It was a lovely night, we got great parking, and we just strolled across the street from the parking garage. Early as we were, though, plenty of folks were already arriving, and they were all dressed up. Suits, ties, sparkly dresses—nice! 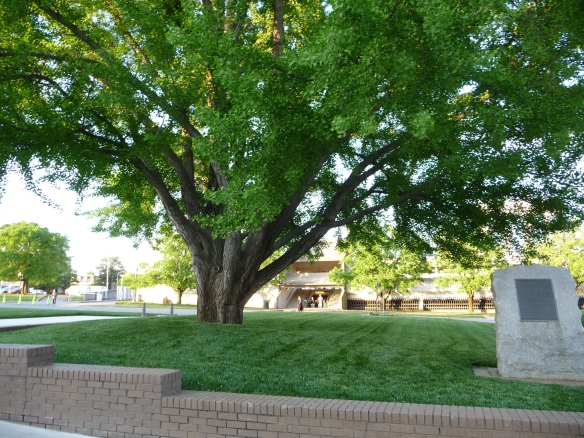 This gorgeous ginkgo tree was right out front. Ginkgos are very slow-growing, so this tree is quite old. 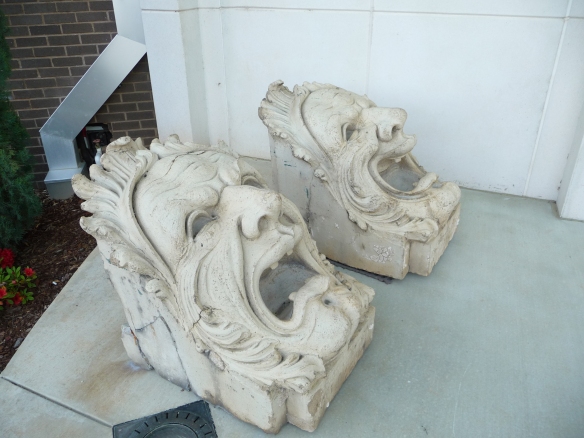 Aren’t these guys fun? They were sitting on the porch near the doors.

Got our tickets at will-call, picked up programs, found our seats, and got our first treat of the evening: a little fireside chat (so to speak) with HSO music director/conductor Gregory Vajda. 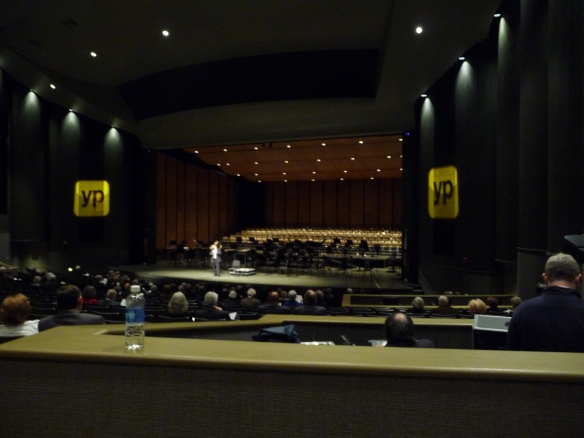 There he is, microphone in hand, talking to a mostly empty though slowly filling auditorium. 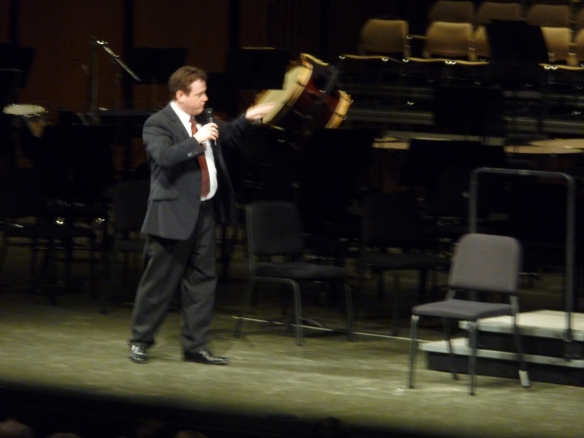 A little closer. Taken without flash.

Actually, I didn’t know who it was at first, but his English was accented and he spoke about the night’s program very knowledgeably, so I figured it out. It was a poignant talk about having decided upon the music for this concert …

… some eighteen months ago, then having the date arrive and realizing how meaningful—in light of the week’s events, which included an intentional bombing in Boston and an unintentional explosion in West Texas—the selections would be. “Chilling and mysterious,” he said. And I must agree: the music was perfectly chosen and ordered.

Finally the orchestra began to file in. I pointed out Patti. The lights went down.

Here are some of the program notes for the Kernis:

Born in Philadelphia in 1960, composer Aaron Jay Kernis (1960– ) wrote his Musica Celestis in 1990. In some ways, it bears relationships to a very famous work by another Pennsylvanian, Samuel Barber, whose Adagio for Strings is one of the most familiar of all American instrumental works. Like Barber’s work, Kernis’s began life as the slow movement of a string quartet, in his case one written earlier that year at the request of the Lark Quartet, then adapted later for string orchestra, adding double basses. Also like Barber’s work, Musica Celestis proves how much can be made from long legato lines played on string instruments; neither work is at its best if transferred to wind instruments, for which space to breathe becomes essential.

Musica Celestis, meaning “heavenly music,” is well-named, for here, indeed, might be the music of angels. … If one ever believed that late twentieth-century music is never achingly beautiful, here is a work to change the mind.

I can’t control what appears on the video below. It really is Musica Celestis; the caption you see is incorrect.

That selection was solely for orchestra, but next they brought out the the chorus. Or, I should say, the choruses—there were four of them, representing community, collegiate, high school, and religious organizations. The two largest groups—the Huntsville Community Chorus Association Symphonic Chorus and the First Baptist Church Sanctuary Choir—are both directed by Billy Orton, and he directed this combined group, which also included the UA–Huntsville Concert and Chamber Choirs and selected singers from the Grissom High School Concert Choir. They were impressive.

Here are some of the notes for the Bernstein:

In his time, Leonard Bernstein (1918–1990) was the biggest name in American classical music, routinely greeted at airports by paparazzi and doting fans. Even now, nearly two decades after his death, he still has more recordings in print than any other American-born conductor. It was mostly on that conducting—dramatic, emotional, and highly person in style—that his popular reputation rested, on the conducting and on having written West Side Story. However, he also composed three symphonies, a violin concerto, various chamber works and songs, several operas, and a pair of sacred works for chorus and orchestra. His Mass was written in 1971, for the opening of the Kennedy Center. Six years earlier he’d written the Chichester Psalms for the Chichester Cathedral in southern England. Bernstein himself conducted the work’s premiere July 15, 1965, with the New York Philharmonic and the Camerata Singers.

The piece features a boy soprano soloist; he was just ten years old. This video features Bernstein conducting. When I was growing up, this man was my idol. 🙂

There was a brief intermission during which I stayed in my seat. Shelley came back and announced, “I met Patti! She says to meet us outside after!” What were the chances that this would happen? It was a magic night altogether.

Beethoven’s Ninth needs no introduction, I hope. You should know it was his last symphony, that it was written while he was completely deaf, and those stories of his being unable to hear the applause for this magnificent, four-movement work at its premiere performance are true.

It is, simply, astonishing. The orchestra was fantastic, the four choral soloists were very good, and the chorus … Oh! I think they got the best deal in this piece. Wouldn’t it be fun to sing it?

Not much to watch in this video but you’re here for the music, and I’ll confess I had to restrain myself from singing along during the performance. I love Beethoven and I’ve listened to this work many times in my life, but never seen it performed live. It was wonderful.

We did have a nice chat with Patti after the show. By then it was after ten o’clock, though, and we still had two hours to drive home. So off we went. Ran into Krispy Kreme for coffee (yes! I had a donut, OK?) and we talked all the way home on the high of caffeine coupled with beautiful, inspiring music.

(* Sometimes they think I’m being morbid, but that’s not the case. I’m stating my wishes. So Jay, Margarita, Nicole, Patti, Jordan, Erynn, Mallory, Chris, Bo … and Cameron and Alli … you’re on notice. :))