Why, yes, we did get out to watch the eclipse.

Eclipse fever was pretty high here in Tennessee, especially for those of us in the “Path of Totality.” Admittedly on the edge of it, but Nashville—the largest city in the path, we were told, and we’re just thirty-five miles southeast of it—was near the center (maximum eclipse time), and many smaller towns near our home were too. Cookeville—home of Tennessee Technological University and, not coincidentally, home of my son and his fiancée, though they were in the process of moving—was a NASA official viewing location, with activities planned for months. There were all sorts of goings-on in Nashville, and even here in town, Middle Tennessee State University had big things planned too.

Not that we wanted to be anywhere close to that madness. Traffic’s bad enough around here on a normal day, and we knew every hotel in Middle Tennessee had been sold out for weeks. Pundits estimated there’d be a hundred thousand extra people driving around in Tennessee, and we’d already seen photos on social media to prove it.

Now, our house was a couple miles out of the path of totality, and the yard has a lot of trees, so we planned to drive into town, while avoiding anything close to MTSU. One of us was a bit meh about the whole thing, too, so we kept said plans low-key. 🙂 I’d been studying the satellite map of town for days, and settled for Evergreen Cemetery on Greenland Drive. Does that sound crazy? I beg to differ. It’s beautiful and historic—some of the headstones are more than 140 years old—and we were looking for a quiet, wide-open space in the middle of town.

We weren’t the only ones with this idea—I’d say there were about a dozen or so other groups scattered throughout the grounds for this same purpose. (But it’s huge—90 acres.) We just looked for a bench and some shade to wait in. 🙂 In a few minutes, Jesse and Katie found us.

Our shade tree. Watch that spot!

It was an absolutely splendid day. As noted, we’d heard about all the hotels being full and the interstates being packed, but honestly, none of that affected us. We just chatted with each other and other folks who were walking around while we waited for the moon to get close to the sun. 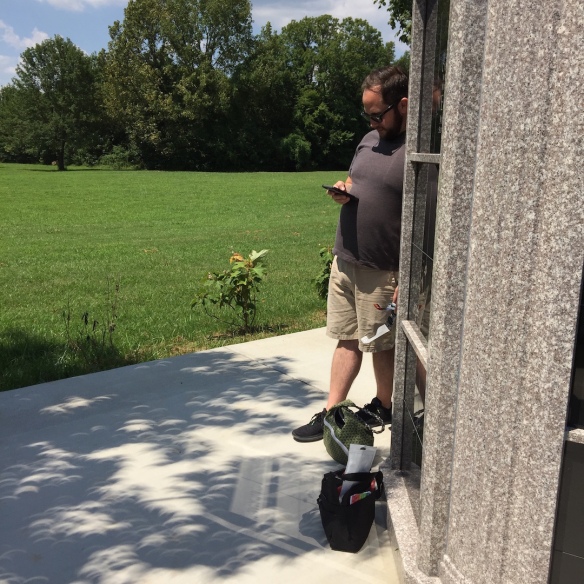 Or checked our phones. 🙂

And yes, we had good eclipse glasses. I’d purchased some weeks earlier, long before all the warnings came out about the bogus glasses that were being marketed. And in fact, I’d purchased the bogus ones, but Amazon let us know we had and refunded our money too. But that happened on the previous weekend. Yikes. So I found the list of NASA-approved manufacturers, and started searching at the top of the list. Many were sold out. But I found a German manufacturer (of telescopes and suchlike) whose sole American outlet was based in Washington State. I ordered four pair immediately, paid, and started hoping they’d arrive. The good folks at Anacortes Telescope and Wild Birds did not disappoint: the glasses arrived in Monday’s mail!

What I hadn’t prepared for is taking photos. Turns out you need filters for your camera too. So even though I’m all about my nice cameras, all the photos here were taken with my phone. And I’m delighted with them! You can see plenty of professional photos online, yeah? So can I.

We’d all read up on some of the eclipse phenomena to watch for, and—thanks to our shade tree, we started seeing the shadows change right away. 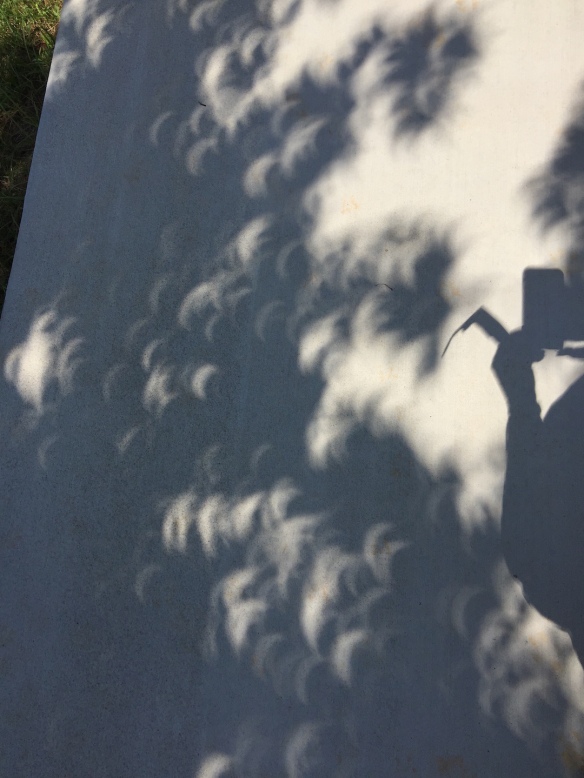 Wow, there they were, right in front of our eyes!

There’s no name for this effect, but it’s caused when the moon begins to move in front of the sun. In the photo above, about half the sun was covered, and the effect is hazy. But look at this:

This is when there was just a small sliver of the sun left; now the effect is very sharp and pronounced.

We also began to notice the light dimming. The camera in my cell phone didn’t do a great job of capturing the loss of light as more and more of the sun was obscured. At first it just looked … hazy. And we thought, It’s happening! But then it got dark enough that the streetlights—which are triggered by loss of light—came on.

Can you see them back there? (1/4) Just under the left “arm” of the tree in the foreground. Our shade tree. 🙂

Every minute or so I’d take another photo. This was about the time we noticed the drop in temperature … and remarked that it really gives you a sense of how powerful the sun is—that even when it is almost completely blocked (and at this point it was just a sliver), it is still very light outside!

This one is distinctly darker, and the streetlight is brighter. (2/4)

This whole time the four of us were just chatting, alternately slipping our eclipse glasses on to look at the moon’s progress and slipping them off to talk and take photos. It was … awesome. And I don’t use that word lightly. It was really stinkin’ cool.

You can see the upper sky was getting dark—it’s definitely dusk. Look for the streetlights in the distance. Taken at the same time as (2/4). Yes, there were clouds in the sky, and later we heard some of our Nashville friends had missed seeing the totality due to clouds, but we had a clear view.

Once the light started dimming, it seems as if things speeded up. Again, a cell phone can’t capture conditions in their true form—it tries to let in as much light as possible. Still, if you look at the streetlight back there, you realize, it’s dusk, nearly “sunset.”

The streetlight is very bright. (3/4)

Now it’s dark. (Remember, the phone camera is lying to you about the color of the sky here. It’s darker than it appears.) The cicadas started singing, just for a few moments. (4/4)

Remembering the other eclipse phenomena, Gerry started looking for the “shadow bands” and took a few seconds of video (not uploaded here; maybe later.) We could see them clearly moving over the concrete where we stood. The Los Angeles Times says, “In the seconds before totality you will see thin striations of light and shadow move across the ground—even over your feet. These are known as shadow bands. … Nobody knows exactly what causes them.”

When it got dark—the four of us standing there, looking up with our cardboard sunglasses, gobsmacked and silent—Jesse said, “It’s covered, you can take your glasses off,” and we did. That was cool. Where the “diamonds” shone around the left edge (called Baily’s Beads), the sparkle was actually a fuchsia-pink color. Wow! Of course, with my cell phone, it looked like this. 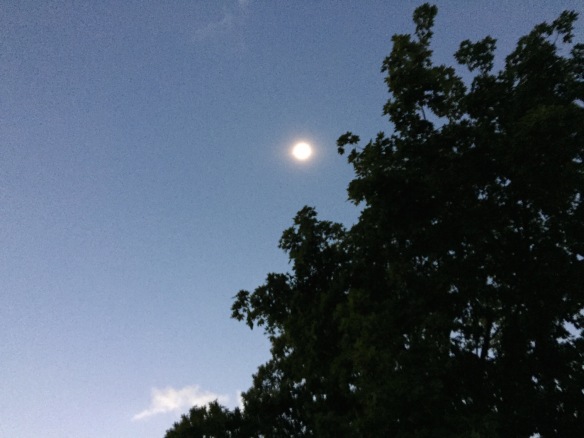 Yep, this is totality as seen by my phone camera. Up above it’s dark, too, but all the camera can see is that sun!

We lingered for a while, as the moon moved the rest of the way across the face of the sun, repeating in reverse what we’d just watched. We remembered to document the moment for volume 3 of our immigration “scrapbook” too. 🙂

We were really glad we’d gotten out and done this. A total eclipse! Wow!

When we were done, we headed home, stopping on the way to have a late lunch at the Parthenon Grille. I texted a bit with our friends Paul and Judy, who’d been in Memphis Saturday for a family wedding, spent Sunday night with us, then drove over to Lebanon (Cedars of Lebanon State Park, in fact) to view more totality seconds than us before heading home to Colorado.

The next day, I saw all sorts of stories about folks getting stuck in “eclipse traffic” after the event. Not so bad getting there, they’d said (people started early, so the volume was spread over days)—but when it was over, it was over, and everyone wanted to go home. A trip that normally took two hours, one Facebook friend reported, took seven hours. We’d gotten a glimpse of that when we left the restaurant and got back on South Church Street (231) to go home. Traffic was heavy—heavier than you’d expect—and when we got to the city limits (right at our subdivision), we saw some pretty serious traffic headed south on Highway 231. It stretched on toward Shelbyville as far as we could see.

But: eclipse. We saw it, and we’re very glad we did.

* With apologies to Lee Smith.