We had a final breakfast at the Celbridge Manor, then loaded up the car and went to Gerry’s house to grab things (gifts, dress clothes) we’d left there. Visited with Bridie for a couple hours. Then we took all that stuff to the airport hotel—the former Bewley’s Hotel, now the Clayton Hotel Dublin Airport.

One of Gerry’s best ideas ever is staying in an airport hotel the night before we fly home. At that point we’re tired and we want as little hassle—and rushing—as possible. I’ve done that thing of dropping the car off and then rushing back to the airport, and I swear, it’s hazardous to my health! So the day before we fly, we check in, unload the luggage, then take the rental car back, shuttle back to the hotel, have an early night, and shuttle or cab to the airport in the morning. It’s just so much easier to wind down this way than rush rush rush.

For this trip, we splurged on a suite—only €20 more!—so we could sort out all our luggage with plenty of room. It was a brilliant idea, this splurge. For one thing, it was just a few steps from the elevator. But it was also a huge room—and we could well remember the size of the regular rooms here.

I’m standing behind a couch and in front of a desk. There was plenty of room to spread out four suitcases. 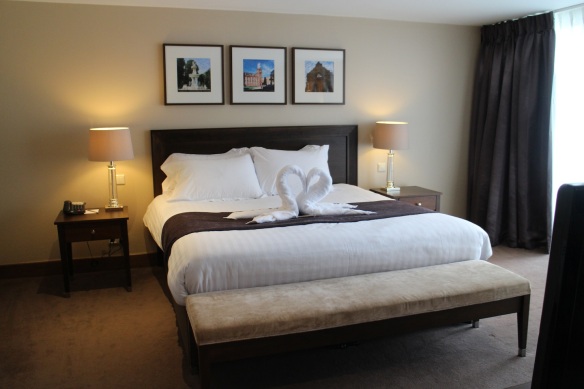 We were delighted with the room.

It was a deluxe bathroom too—this is only one feature of it.

They’ve done a lot of work on this hotel and the airport area in the last couple years. The access to the airport is vastly improved, and the construction is finally finished, so a tourist like myself can drive to and from with minimal confusion. At least one more gas station has been added to the mix, which is handy for those of us turning in rentals—and the best part is it’s right across the street from the hotel!

This photo, taken from the elevator tower, shows the new gas station. I have a photo—can’t find it now—taken from this same spot and the field has several horses grazing in it. I’m sorry they’re not still there.

So we gassed up, returned the car … and then spent at least an hour, probably more, working out the packing, getting it so each suitcase weighed less than 50 pounds—or less than 23.0 kilos, which is just slightly more than 50 pounds. (And as it turns out, when we got to the window the next day, the heaviest bag was 22.0. Yay! Of course, we put everything heavy that wasn’t liquid into the rolling carryon bag we’d bought at Samsonite.)

We ate in the bar of the hotel, then grabbed two apple tarts (pie) to take up to the room with us to enjoy with a cup of tea; I shut down the computer and we were just going to relax in our jammies when Gerry’s brother Richie called. Then Gerry’s nephew Eoin called. Both were dropping by to see us—no plan, just each had decded to do that. So we got dressed, and they arrived within seconds of each other. What a great visit to see us off!

That was nice. Gerry also called his older brother, William, before we went to bed—and he called his preferred cab company to arrange an early pick-up. With so much luggage—he also requested a van—we don’t want to hassle with the hotel’s shuttle bus, which will drop us a block or more away from the terminal. The cab company will put us out right in front.

We’ll be home tomorrow! It’s interesting how the time zones make this westward trip seem so much shorter. Seem being the operative term. 🙂

1 thought on “Winding Down, At Last”