28 September 2015, Monday
Oh, I’m just a little information hub here! John (Margaret’s husband) called me last night about his preparations … Pris just texted me that she and Emmet are at the airport … Rebecca’s already on the other side of the Pond, for work … Alli is, too—on her honeymoon with Sabas—and she messaged me this morning. I’ve also emailed with Tiffany about her final details …

Look out, Dublin! The Yankees are a-comin’!

It’s been two years in the making. Planning an international party has been exciting and exasperating. Riding herd on the guest list and RSVPs has been exhausting. But I’m looking forward to seeing old and dear friends—some I’ve seen very recently and others I haven’t seen in years.

After our party on Saturday, Gerry and I are taking a long-delayed honeymoon to County Donegal. When we started the planning process, my dear friend Margaret was still alive; she and John were planning to travel with us. So the Donegal destination, actually, was chosen because when I’d asked Margaret where she’d like to go, she said, “Somewhere I’ve never been.” But then she got sick, and sicker, and we lost her in April. In June, John called me; before she died, Margaret had made him promise he’d go to Ireland for the party. (You have to understand: she was a force of nature, this woman.)

And so he kept the promise. He will travel with Gerry and I (though not for the entire trip). We are both looking forward to it.

Now all I have to do is get through the slog of crossing the Atlantic. I bought a new smartphone so I could use it internationally, and added to my data plan to cover that usage. I’m already packed and have begun my personal slow-down so that I am rested up for a twelve-hour journey.

In other news, Gerry’s visa interview at the U.S. Embassy is tomorrow … I didn’t sleep well last night and probably won’t tonight either, even though our attorney assures us that it’s all a foregone conclusion. All over but the shoutin’. Nonetheless, I am thinking good thoughts. I should hear from him before I leave.

I will be leaving the house around lunchtime on Tuesday, landing in Dublin in time for breakfast on Wednesday, and will be home in time for supper on October twentieth.

The cats know something’s up (sigh). 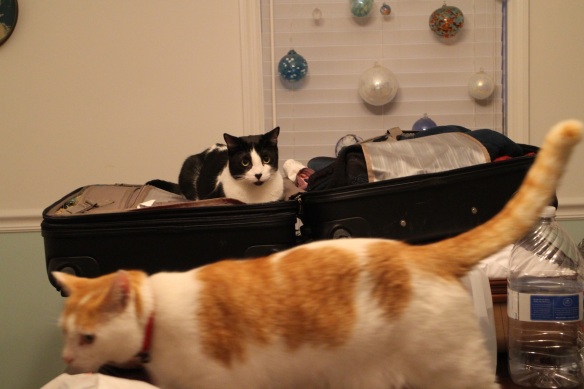 This begins my series of posts for that trip. Margaret would have loved it.