The closest I get to a celebration of Halloween these days is to put a pumpkin on the front porch and call it good, but, of course, some folks get a lot more excited about it than I do. Some, in fact, take it too seriously—and I’m not talking about the folks with the inflated Headless Horseman in the front yard—which is why I also enact the Great Halloween Lockdown for my beautiful black cat. 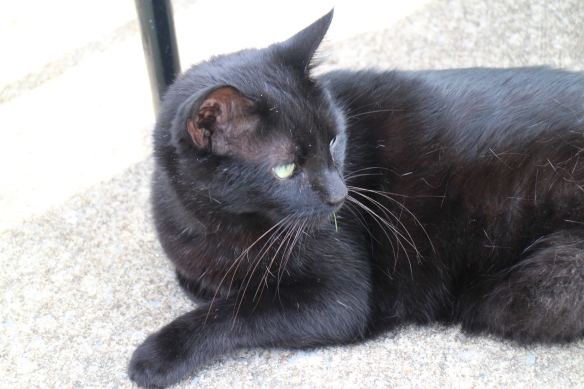 Laddie never met a human he didn’t like, which makes him vulnerable to stupid people this time of year.

The Lad thinks I’ve just forgotten to open the cat door, and spends a lot of this week before Halloween trying to get my attention so I’ll remember. It’s a trial for both of us. 🙂

Where were we? Oh yes.

Samhain. The Gaelic origin of Halloween.

They didn’t teach these things to little American children when I was growing up. Wikipedia says Samhain

is a Gaelic festival marking the end of the harvest season and the beginning of winter or the “darker half” of the year. It is celebrated from sunset on 31 October to sunset on 1 November, which is nearly halfway between the autumn equinox and the winter solstice. Along with Imbolc, Beltane and Lughnasadh it makes up the four Gaelic seasonal festivals. … [It] is mentioned in some of the earliest Irish literature and is known to have pre-Christian roots. Many important events in Irish mythology happen or begin on Samhain. It was the time when cattle were brought back down from the summer pastures and when livestock were slaughtered for the winter. As at Beltane, special bonfires were lit. … Samhain (like Beltane) was seen as a liminal time, when the spirits or fairies could more easily come into our world. … In the 9th century, the Roman Catholic Church shifted the date of All Saints’ Day to 1 November, while 2 November later became All Souls’ Day. Over time, Samhain and All Saints’/All Souls’ merged and helped to create the modern Halloween. Historians have used the name ‘Samhain’ to refer to Gaelic ‘Halloween’ customs up until the 19th century.

I tell you all this so you’ll enjoy this article from an Irish web newspaper, about some ancient Samhain spots in Meath, Roscommon, Dublin, and Wexford:

Me, I don’t care much for the spooky, so when I get to visit these sites, I’ll make sure it’s in the broad daylight. In summer. Boo! Happy Halloween!

(Note: the author misspells William Conolly’s name; he was Speaker of the Irish House of Commons, which is how, apparently, the author comes up with “William Speaker Connolly.”)