I love the way my camera dates every shot I take and the way iPhoto splits them out into “events” by date.

The Wikipedia entry quotes an Irish Times article from 10 March 2010 that says the gentleman who came up with this idea “views it as a ‘story-telling’ tourist attraction designed to give visitors ‘the leprechaun experience’ rather than simply a ‘commercial venture.’”

I’m sure it’s lovely. But I settled for this photograph. 🙂

I was recently in Dublin and came face to face (in a manner of speaking) with the thermal station towers Dubliners call the Poolbeg Chimneys. 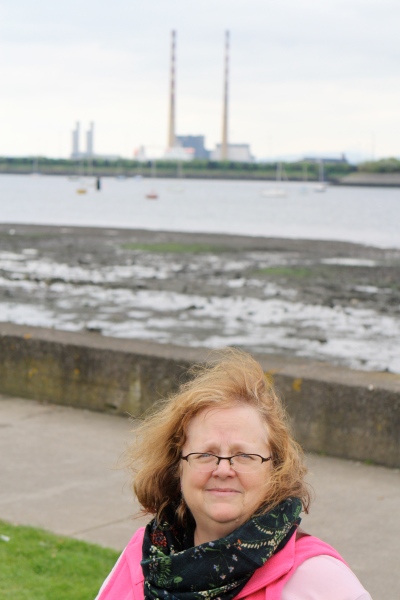 On the strand at the Clontarf Road and Vernon Avenue, with the Poolbeg Towers in the background.

You can read a little more about them here, but if you want to see the emotion attached, watch this short film from Irish filmmaker Jenny Keogh: Landmark.

My friend Evelyn is a New Yorker. She wasn’t born there, and she’s retired to a southern clime, but if you know her, you know she lived and worked in the city for decades. She’s a New Yorker.

Naturally it was Evelyn who introduced me to this site: Urban Compass. (You don’t have to sign up. You can click on categories with impunity.) In beta at the moment, it’s a real estate listing service for NYC (although I imagine it will expand to other cities as time goes on). “We’re combining transparent online search with a team of Neighborhood Specialists to make finding a home quick and easy,” the site says.

But what charmed my friend—and me—is this page: the neighborhood guide. It’s filled with photos and up-to-date information about the neighborhoods some of us have only read about. Included thus far:

Gosh, the names alone make me want to hop on a plane! But I have books to edit, so instead I’ll do my exploring online. For now.

Gerry and I are just back from Eire, still getting up in the middle of the night … and we have a second wedding in ten days to attend! While I’ve just been to my second Irish wedding, this will be Gerry’s second American wedding. (And believe me, they are different in many ways.)

When I got the wedding invitation weeks ago, I was excited to see the ceremony would be held on the grounds of the Hermitage—the historic home of Andrew Jackson, seventh president of the United States (1829–1837). Tennessee has provided three presidents to the nation; in addition to Jackson, there was James K. Polk, the eleventh president, and Andrew Johnson, the seventeenth.

Jackson bought this 420-acre cotton farm in 1804, when he was in his late thirties. He moved with his wife, Rachel, into the log home on the property and called it the Hermitage. Later a large home was built; this was damaged by fire and the Greek Revival mansion that replaced it is the one tourists visit now.

It’s a very quiet place, in spite of the fact that Greater Nashville has grown up around it. It’s ten miles from downtown; in the early 1800s, this was a long way, and the farm was most definitely a country farm. It still feels like it. 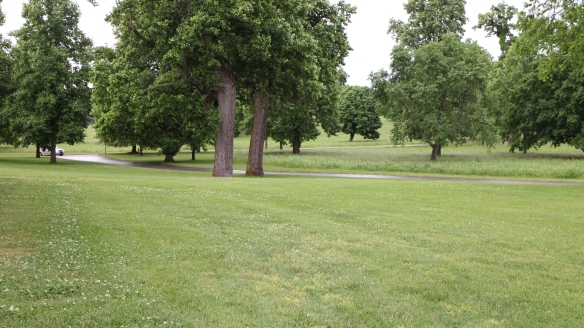 The grounds at the Hermitage are beautiful.

But we were talking about a wedding. This was held at the little church on the grounds. 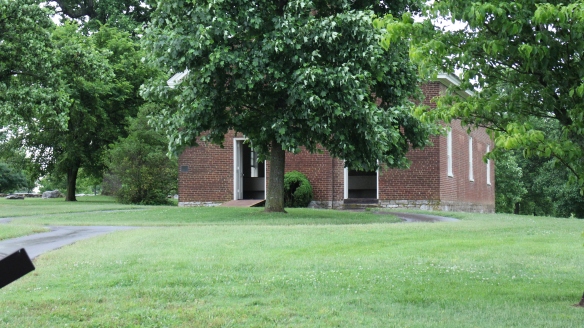 In 1832 Jackson donated lands, funds, and labor to build this church, originally nondenominational but soon to become Presbyterian. (This is obvious when you see the interior.) The church had an active congregation until 1965, when it was gutted by fire, leaving only the brick walls. The congregation rebuilt elsewhere, while the old brick church was restored to its 1830s incarnation. 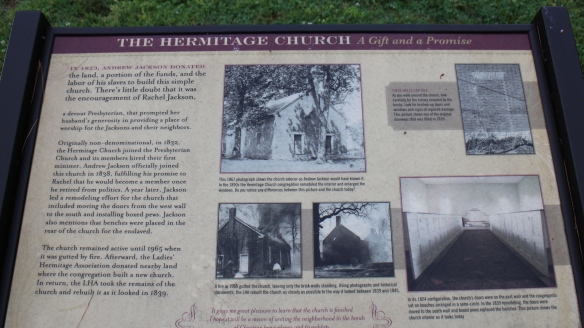 Information from the site at the Hermitage Church. Don’t forget to click (twice) to enlarge and zoom. 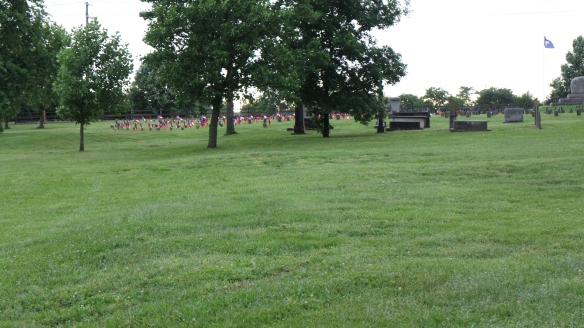 In 1890 the state of Tennessee established a home for indigent and infirm Confederate veterans on the grounds of the Hermitage farm. Some 487 of those vets are buried at the Tennessee Confederate Soldiers’ Home Cemetery, about a hundred yards from the church.

The inside of the church is very plain and simple, which is a beauty all its own. Because it is a restoration of the original, there is no air conditioning. However, Middle Tennessee had just been visited by a series of thunderstorms that lowered the temperature, so between the fans and the open windows, it was quite pleasant. 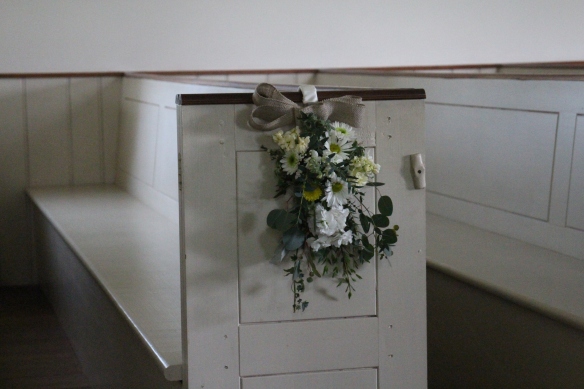 The flower arrangements were spectacular. I wish I’d taken more photographs, because they were all just lovely.

Every wedding stretches to include personal touches. This included the muted tones of the church interior, the soft blues and greys of the bridesmaids’ dresses, and the pale yellow of the flowers … and the dresses of the bride’s cousin and niece, who walked the aisle. 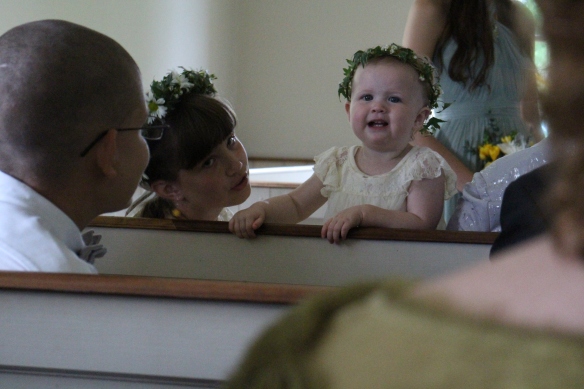 Wearing pale yellow and wreathes of daisies in their hair, the two young girls, Abbye and Ivy, settled into a pew. Ivy’s mom was matron of honor. 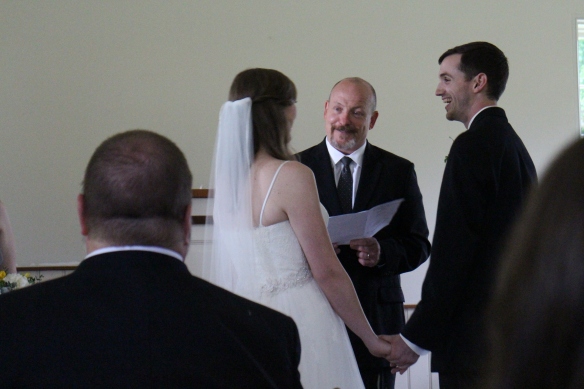 It was a ceremony punctuated with smiles and laughter.

There were moments when we weren’t sure if the bride, Sarah, was crying or laughing. Her groom, Austin, was a rock, though. He held her eye from the moment she entered the church, and bore her up with an encouraging look or smile just when she needed it. It was sweet to watch. 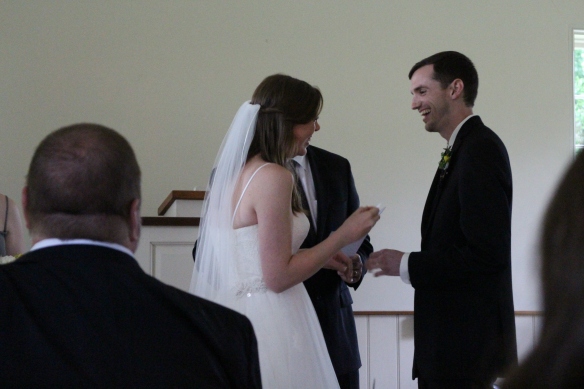 Here it was clearly laughter. Which is as it should be, I think. 🙂 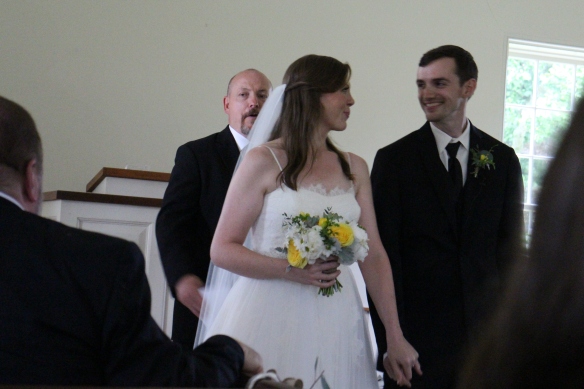 They were very connected, these two. (And that gorgeous ivory dress! Light, summery, perfect!) 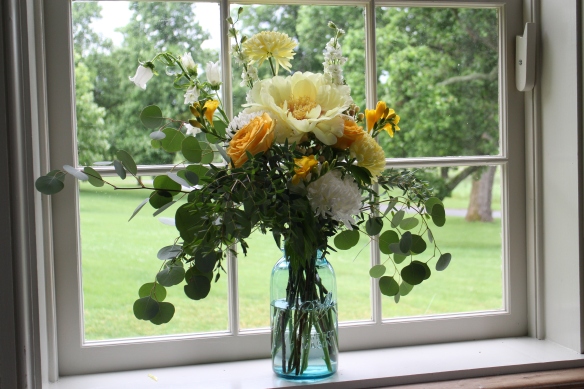 Flowers in vases sat in the windows on either side of the pulpit.

After the wedding we drove back to the mansion itself to park, then took a footpath to the Cabin by the Spring, where the reception was held. (Next time I’ll bring some tennis shoes for that walk out to the North Forty; I got a heck of a blister from my dress shoes.) Built in 1940, this rustic log cabin is shaded by one-hundred-year-old trees and was a perfect setting for delicious barbeque and music with a western swing to it. Of course, it was getting dark by then (and me without my flash attachment), so here’s a little look at the cabin courtesy of someone on Flickr.

But this post is meant to be about the Hermitage and Andrew Jackson too. We’re fortunate to have such a magnificent presidential museum so close at hand here in Tennessee. Love ’im or hate ’im—and no one’s neutral on Old Hickory—Jackson was an American war hero (in 1815 he defeated the British in the Battle of New Orleans) who put his own stamp on the presidency. So take a road trip, if you’re so inclined, and spend a day at the Hermitage. It’s worth the trip, even without a wedding invitation. 🙂

We left at dusk. A deer was standing in the tall grass on the right as we drove through the property toward the main highway to take us back to town. I slowed, and the deer bounded across the road and disappeared into the field of grass on the left. It was magical. Just magical.